In-depth Twitter analytics require several tools to get the full range needed for reports. However, SocialBro is soon to become the one stop app for all your Twitter insights.

Reliable and in-depth Twitter analytic tools can be hard to find. Usually, marketers will end up using several different services to get the full understanding of their clients' Twitter account. Crowdbooster, Sprout Social, Twitter Counter.... the list goes on. With SocialBro - available on your desktop or as a Chrome app - most of these tools can be removed from the bookmark bar as the free service provides just as much and more. 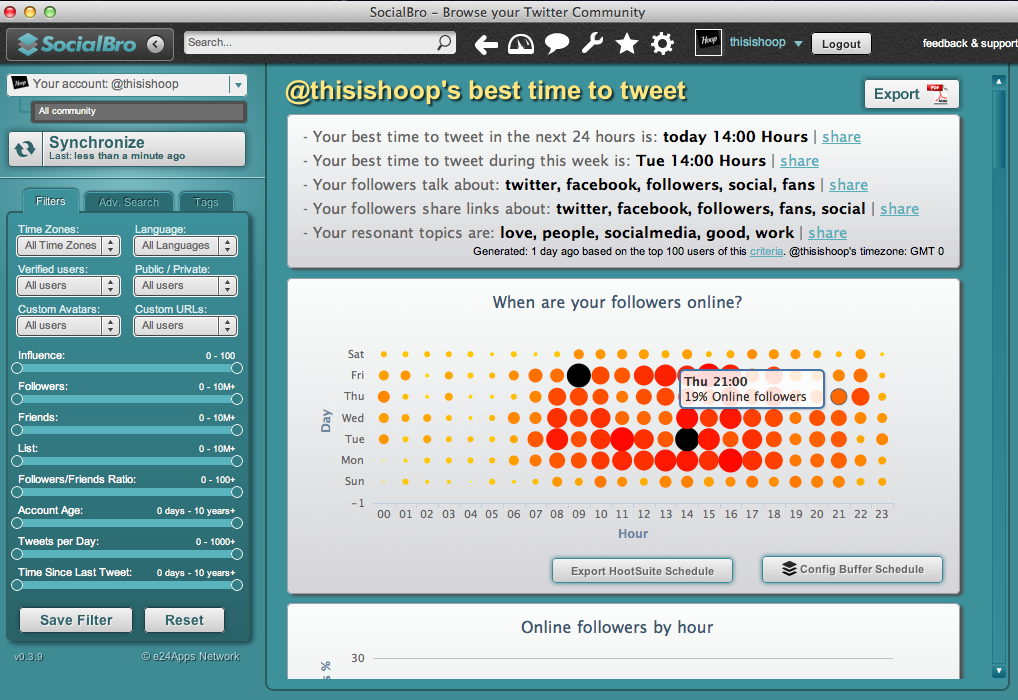 When to Tweet, analytics on your followers, follower bio tagclouds, your influence and authority and your famous followers are just the start of SocialBro's tools, which also includes real time analytics, allowing you to see who is online at that very moment, what language they predominately speak and how many people follow your followers... it can get pretty in-depth.

From Spain, SocialBro became a part of SeedCamp Barcelona late last year. SeedCamp explained it was SocialBro's attitude, as well as product, that impressed them the most.

Socialbro was one of the companies that impressed us most throughout the day – not only because the founders were extremely engaged in deep conversation and discussions with everybody in attendance, but also because they really let their business shine during the presentations and mentoring sessions. This is why they are the newest member of the Seedcamp family.

SocialBro also lets you add you several accounts for no extra charge, unlike CrowdBooster. However, there are limits to the free service, as it will not work with accounts with over 250,000 followers and many analytics, including best time to tweet, is based only on your top 100 followers. There were talks of a premium service coming in March 2012, but 2 months down the line there is still no such service available.

Saying this, SocialBro is still better than most paid for services and is an amazing tool to get the most out of your followers. Still in its Beta phase, Socialbro could become the one stop Twitter analytics app, second to none.