There are two things that stand out from this list; they are all games and they are all free, which seems an odd way to make money. How do they do it?

As mentioned, there are a lot of apps on the Apple App Store. The reality is people can't afford to download every app available just to test them out. By setting the price tag to free, more people can test the app with no risk.

Possibly the best example of this working is Temple Run. The app was originally set to .99¢ and garnered 400,000 downloads before interest started to dwindle. The company then made the decision to make the app free with in-app purchases, and saw downloads rise to over 46 million.

It is easy to see why the freemium model, also known as free-to-play, has become the monetization trick of choice. Let's do the maths.

Temple Run was originally 99¢ and received around 400,000 downloads. That's a reasonable return of $396,000 for quite a simple mobile game. However, when the app went free and got the 46million downloads, the company predicted that 1-3% spent money on an in-app purchases.

A recent report by app analytic company Distimo reveals that in February this year 71% of money made with apps for the iPhone was through in-app purchases from free apps. 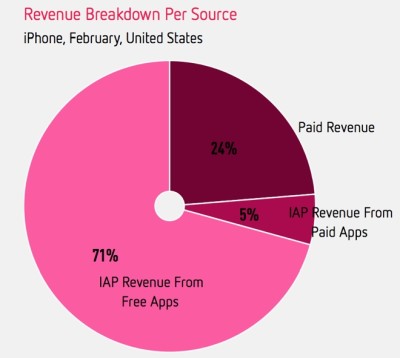 But it gets beter for all you app making moguls, as the report also reveals that some apps are making a lot more money per download than they would have if they went for the paid revenue model, with some apps reaching as high as $7.04 spend per download.

But how do you get your audience to spend? Well, there's a fine balance. If you limit the experience so much that they have to spend, chances are they will find something else to fill their time.

By giving users a good experience, allowing them to do enjoy the app without spending any money, a small percentage will spend a lot of money to get even more, and that small percentage can generate a large revenue.

Oh, and you might get the cheeky download here and there from a kid getting excited with their parent's iPad. Not recommended.