Ironically, advances in digital technology have allowed people to make their photos look vintage using services such as Instagram. Now you can produce the same results for your videos with Viddy.

After the Facebook buyout of Instagram for a cool $1billion, it has never been more popular to retro-fy your pictures. At the same time, the tech world are keeping their eyes glued on Zuckerberg's activity to spot another headline grabbing purchase - even though he said there wouldn't be one. 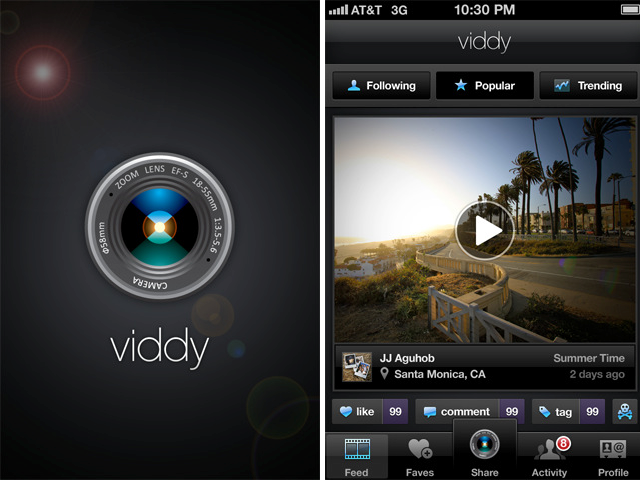 So when the Facebook CEO uploaded a video of his dog Beast on Viddy [iOS], the internet community became a lot more interested. However, Zuckerberg is not the first high profile name to be using the one-year-old video service with many celebrities having already signed up, including Snoop Dog, Bill Cosby and Linkin Park.

The company, started by JJ Aguhob and Brett O'Brian who worked together on XDrive and PluggedIn, has received $36million backing from investors, including GreyCroft Partners (Klout), Battery Ventures (Friendster, GroupOn) and Twitter co-founder Biz Stone.

Viddy is gaining huge popularity, and quickly. The service recently accumulated 5.5 million users in only 11 days, and added Shakira, Jay-Z and Will Smith to the list of aforementioned investors.

Speaking to Bloomberg, Alan Patricof of GreyCroft Partners seemed shocked by the growth of the app, currently boasting 26million users.

(Viddy is) growing so fast, I have to keep refreshing to get myself up to date. I could swear I spoke at some place a few weeks ago, we were at 4 million.

Viddy is incredibly similar to Instagram in many ways - part of the appeal of the service is its simple usability and ability to create stunning short videos. Of course, there is also the added feature of social networking, with users able to follow each other, 'love' people's videos and comment.

In fact, Viddy is so similar to Instragram that we can't help but wonder where the boundaries lie with intellectual property, especially with the word "lawsuit" becoming a digital buzzword. However, at the moment, Zuck doesn't seem to mind.