By going digital, we have saved energy in reducing printed materials but it comes with its own environmental issues

Going digital is one of the best ways to reduce waste. Instead of having a hamper full of old newspapers that will eventually be thrown away, you could have your Guardian downloaded on your iPad in time for breakfast without having to use any paper... and it comes with extra content! 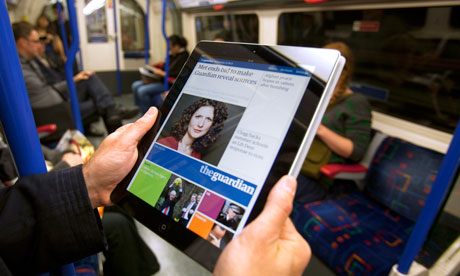 However, by no means does digital have no environmental impact but things are looking better. We look at the problems digital faces in being more environmentally sustainable and some of the current solutions out there.

Of course, there are is the obvious problems with sustainability and digital devices... turning it on! A problem magazines and newspapers never had was the need for a battery.

Whilst charging your own devices can cost very little, the combination of everyone's iPads, smartphones and computers can be substantial.

You can see the energy impact of large amounts of low energy devices being charged at once easier with TV pickup, the phenomenon of a spike in electrical grid due to large amounts of people making a cup of tea during the advert breaks on television.

As we push towards mobile, the amount of energy needed to power these devices falls considerably. According to a report from Opower, the annual electricity cost for a laptop PC is $20 cheaper to run than a desktop PC. If you imagine everyone moving from desktop to laptops, the positive impact that could have on the environment would be significant.

However, this is nothing compared to the drop in cost to an iPad or a iPhone, both under $2 a year to charge. 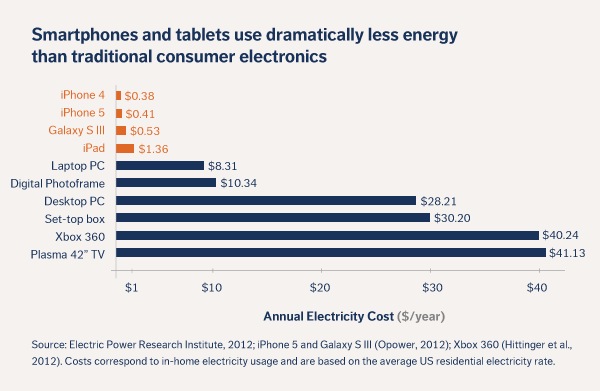 Without beating the same old drum, if we started to create content for mobile first and gave people a better experience of consuming content and performing tasks online on their smartphones, the environmental benefits would be huge.

Data usage is not just something your service provider measures so they can charge you for going over your plan, it can actually have a big impact on the environment. 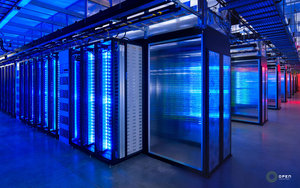 The more data that is being sent around, the more power is used by data centres, not exactly the most green things in the world.

One issue with data centres is keeping them cool to stop from overheating. According toThe New York Times, there is a story of how Facebook had to buy every fan they could get there hands on to cool their servers to prevent the website from going down.

In fact, this fear means data centres tend to have energy draining generators (in case of power cuts), cooling systems and running on full capacity at all times (just incase), leading them to waste around 90% of the electricity the pull off the grid.

Mentioned in the same New York Times from earlier, a single data centre can use the same amount of energy as a medium-sized town.

The solution may appear to be an easy one - use less data. However, there is another way of reducing the amount of data we use without limiting our time online - build more efficient websites and apps.

Which is exactly what Apple have done with Apple Maps. It may be that the service has seem some backlash from users as it fails to perform to the same standards as Google Maps, but it could save a substantial amount of energy. 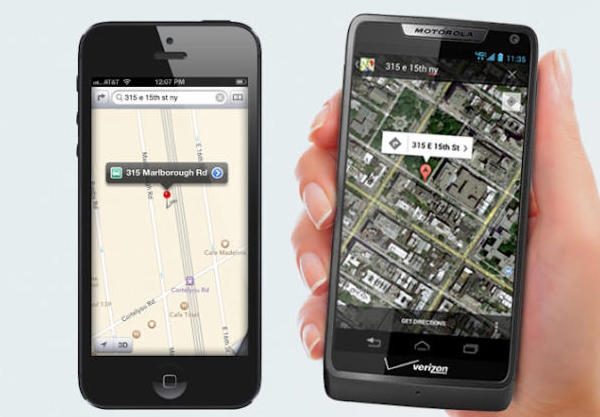 According to Gizmondo, Apple Maps is nearly five times as efficient than Google's service. The post may joke about it allowing your more data to upload photos to Instagram, but if services started becoming more data efficient, it could help save the planet.

Another solution companies are looking at is more sustainable ways to run data centres. What The New York Times articles doesn't mention is the non-profit consortium The Green Grid, who work to improve the efficiency of data centres around the world.

This article from The Guardian reports that The Green Grid claims more data centres are using the technique natural cooling to maintain required temperatures, instead of using energy draining fans. In fact, this has led Facebook to build one of their data centres in a Swedish town just south of the Arctic Circle.