If you think of Ricky Gervais, you will probably remember him for The Office, Extras and his record breaking podcasts with Stephen Merchant and Karl Pilkington. What you might not associate Gervais with is the startup app world. However, the comedian has made the transition with Just Sayin'. 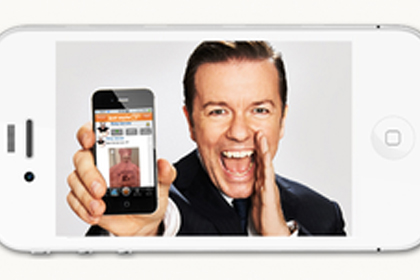 According to Gervais, Just Sayin is "to radio as Twitter is to newsprint", as you can update your status with video, photos text and audio recording, with co-founder David Hayden claiming that the addition of the human voice on social networks is "the next big thing".

Having officially launched yesterday, predicting the traction and usage of Just Sayin' will be difficult until it has been given some time. Although, as the old Bill Gate's article states "content is king", Ricky Gervais is known for constantly delivering great content, which makes visiting the social network a day after launch enjoyable - even if it is only to his profile.

Currently on desktop and iOS devices (Android app expected to arrive later in the year), the app was developed by serial entrepreneur Hayden, with his CloudTalk technology, and Ricky Gervais as partner and Creative Director.

Of course, the app links up all your updated to your Facebook and Twitter to notify your followers of your Just Sayin' activity, but could it be that the CloudTalk CEO and former XFM radio presenter are overestimating the power of voice on the internet? Do you want to have to pause your music to check your updates? It seems only time will tell, and Gervais agrees as he said:

"[Voice communication] will create a different world," Gervais says. "We don't know why it's important yet or even if it is, but it might be."