Freeing content from CSR reports and making it social will not only actively engage stakeholders but also mark out the most innovative corporations. 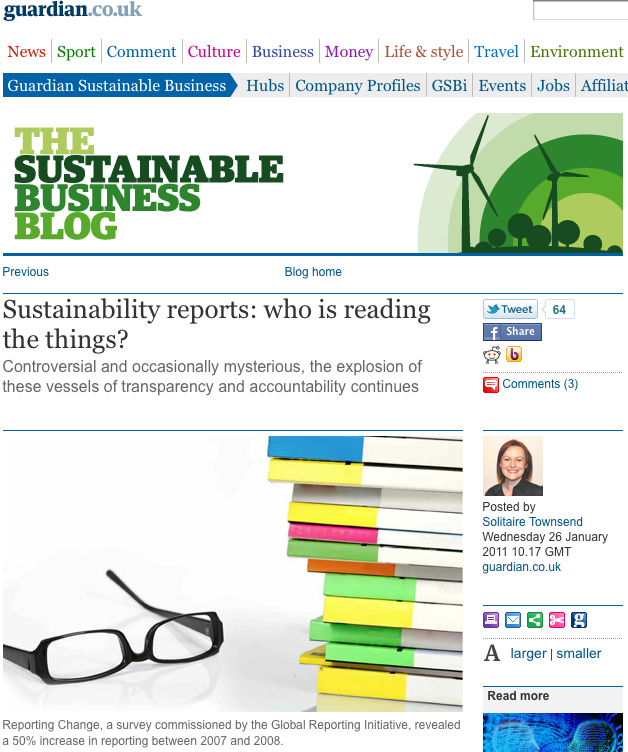 With a 50% increase in CSR reports between 2007-2008, are these reports designed to engage stakeholders or to account for corporate performance?

A post on the Guardian's Sustainable Business blog caught our eye yesterday. Using data from research commissioned by the Global Reporting Initiative, Solitaire Townsend (co-founder of Futerra) writes that with the number of CSR reports released quadrupling since 2005, there appears to be some confusion as to their purpose.

It appears that 60% of businesses producing CSR data think the reports should be used as a stakeholder engagement tool, whilst just 17% of stakeholders agree. Although 60% of readers are positively influenced by sustainability reports, it seems CSR reporting should be a way of communicating performance rather than an attempt to engage stakeholders.

To us the time is right for businesses to embrace social media and utilise it to distribute CSR content. This is not a fad or a bandwagon to jump on. It is about getting compelling information and stories out to people in the best possible way. Report content is rich, it can be interpreted, released and distributed as facts, stories and to stimulate debate. In our recent digital strategy with PepsiCo, we showed that the social media platform is ideally suited to both reach and engage stakeholders.